As Basem Ayoubi stands at the front of his classroom in a shiny new school, his mind goes back to an Arabic song he used to sing in kindergarten — and the woman who taught him to sing it.

Basem is a teacher at the new Soraya Hafez School in northeast Edmonton, named after the longtime advocate for Arabic language and culture in the city. “Syeda Soraya” (“Mrs. Soraya” in Arabic) was one of his teachers for his first four years in the Arabic bilingual program at Malmo School.

“One of my earliest memories is we always sang this goodbye song in Arabic. Every time we got up in line to leave, we’d sing, ‘Goodbye, goodbye, goodbye, my friends.’ So from kindergarten to Grade 3, that was a good way to end the day.”

Her husband, Richard Awid, says Soraya is proud to be recognized by having a kindergarten through Grade 6 school, which just opened to students, bear her name. Now 84, Soraya has lived at the Edmonton General Continuing Care Centre since having a stroke in 2015.

The new Soraya Hafez School is located in the northeast Edmonton neighbourhood of McConachie.

“She can’t speak, and she’s paralyzed on the right side. Her mind is there, and she communicates things through nodding yes or no. I told her that the school was being named after her, and she seemed to be very excited,” says Richard.

Originally from Egypt, Soraya arrived in Edmonton in 1971 and earned a bachelor of education from the University of Alberta. After teaching for several years in Lac la Biche, she accepted a teaching position in the Arabic bilingual program in the basement of the Al Rashid Mosque. And when the Edmonton public school board started the first Arabic bilingual program at Glengarry School in 1983, Soraya became the first teacher.

Soraya Hafez with her students at a Chinese New Year's party

The program later expanded to Malmo school as well as Killarney Junior High, Queen Elizabeth High School and, most recently, Calder and Evansdale schools. And Richard says Soraya was one of the trailblazers as a teacher and curriculum writer. And she later returned to the University of Alberta to teach Arabic part-time.

“My mom was everywhere,” says daughter Sahar Deeb. “And in between all that, she volunteered. She involved herself directly in the community.”

Soraya married Richard, also a teacher, in 1988. They were part of a group that raised money to restore the Al Rashid Mosque and move it to Fort Edmonton Park in 1992. Soraya also served as president of the Edmonton chapter of the Canadian Council of Muslim Women and successfully advocated for female police officers to wear a hijab as part of their uniform.

Sahar says her mom so valued her own children’s education that she would find ways for Sahar and her older brother, Tariq, to keep learning while on vacation.

“When we travelled to Egypt, the first thing she did is get us a tutor to teach us Arabic while we were there holidaying,” says Sahar. “My cousins used to laugh at me. We’d be sitting in the dining room and they’d walk by and chuckle that it’s summer time and we’re sitting there learning when we’re supposed to be having fun.”

Sahar is thankful that this legacy that has been passed down to all seven of Soraya’s grandchildren. Sahar’s four daughters went through the Arabic bilingual program their grandmother helped start at Glengarry, and Tariq’s sons attended the Edmonton Islamic Academy. Sahar’s third daughter, Hana, teaches in the bilingual program at Calder.

“When they were at Glengarry and it was Read-In Week, guess who showed up? Grandma had to do Read-In Week. And she knew all the teachers, so she would check up on them.”

Two years ago, Richard got a call from the Edmonton public school board chair saying the board was naming a new school after Soraya.

“I was excited, and I was speechless as well,” recalls Richard, who had nominated her. “I really started to cry at that point.”

Husna Salum, a licensed practical nurse, has cared for Soraya since she arrived at the Edmonton General in 2015. Husna lives near the school and often shared construction photos with Soraya.

It’s been three decades since Basem sat in Soraya’s kindergarten class in Malmo, and the Grade 5/6 teacher tries to emulate her approach.

“I remember her being very motherly to her students. She treated everyone respectfully,” says Basem. “Educator-wise, she probably was the biggest impact that I’ve had.” 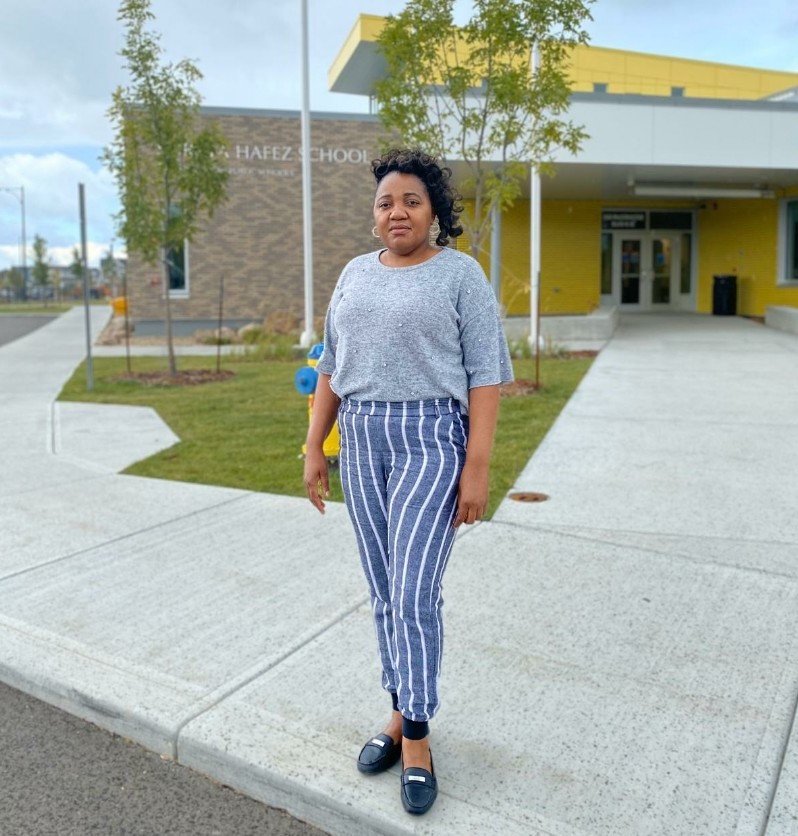 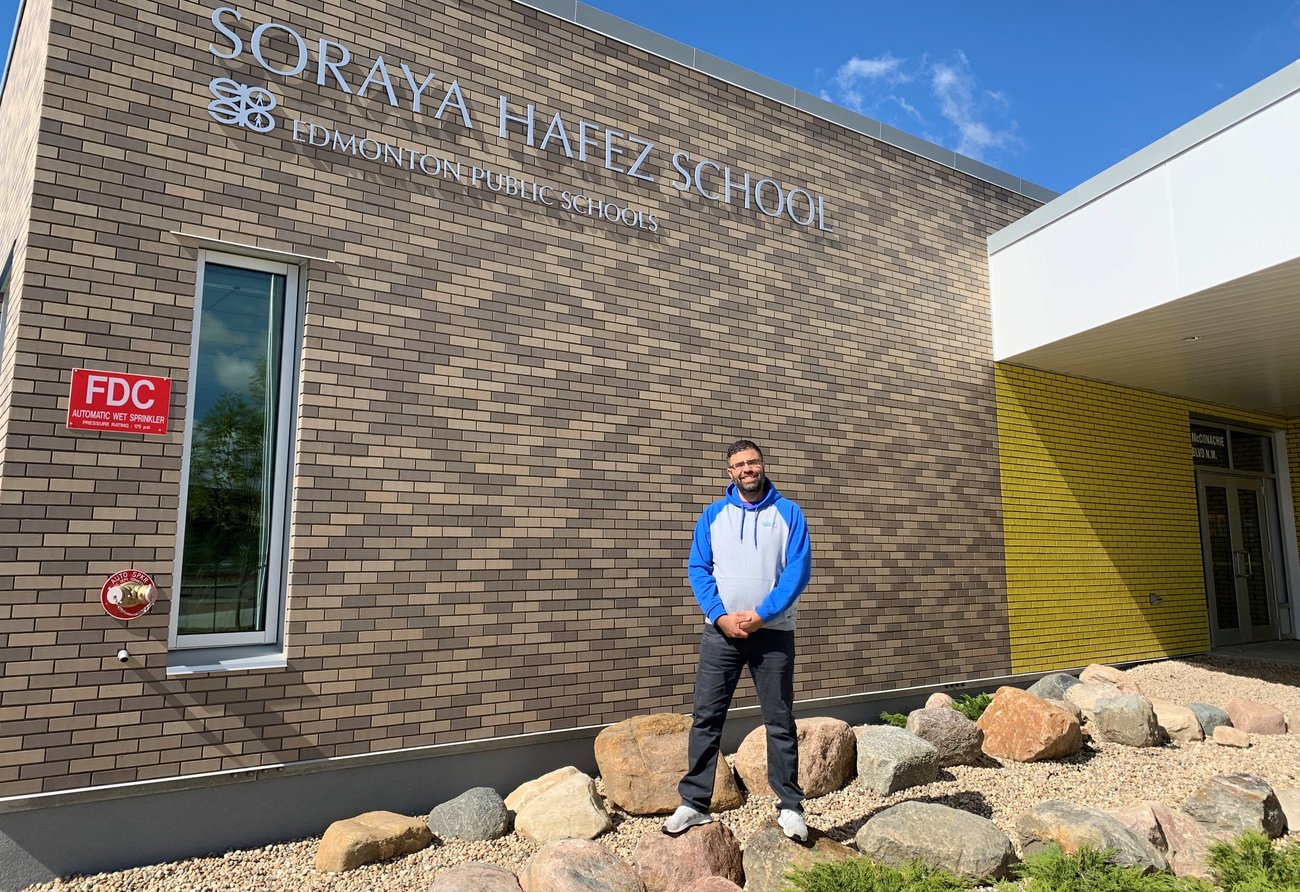 Husna and Basem say Soraya is well known throughout Edmonton’s Islamic community. Basem has crossed paths with Soraya and her family several times since his elementary school days. He’s been able to tell Soraya about his career choice and even taught her grandson at the Edmonton Islamic Academy. When he interviewed for his current position, he made sure to mention his connection to Syeda Soraya.

“I said, ‘This is exactly where I want to be, in a school named after my teacher.’ It’s very poetic, you could say,” says Basem. “I already have a lot of full circle moments with her. So this really felt like the end of the line, teaching right here at her school.”