A lifetime of adventure together

On a blustery day, surrounded by family, Joe and Yvonne Sell marked 69 years of marriage during a celebration outside their Edmonton General Continuing Care Centre home.

“We’d planned to meet in the parking lot, put together a banner saying ‘Happy Anniversary,’ then call the unit and ask them to bring mom and dad to the window,” says their daughter, Cynthia Johnson.

When staff learned about the Sells’ anniversary, they managed to arrange an outdoor visit, much to the delight of Joe and Yvonne and their family.

Sixteen family members — kids, grandkids and great-grandkids — gathered in the front parking lot of the Edmonton General. They cheered when Joe, 93, and Yvonne, 89, made a short appearance.

“We were so happy,” says Cynthia.

While COVID-19 has limited how people can celebrate, the family wanted to find a way to honour their parents, who met in a theatre group in Hamilton, Ontario, and married on June 9, 1951. Just four years later, the adventurous couple headed west to Edmonton for a work opportunity for Joe. They settled in the Beverly community with three daughters and stayed in that home for nearly 50 years. Over time, the family grew to 10 children — seven girls and three boys.

“Our house was busy, crowded and noisy and full of love and laughter,” says Cynthia, “though there were tears now and again.”

Family vacations were spent camping in tents in the mountains. Joe and Yvonne would pack the car full of kids, tents, food and clothing and go camping for a week or two at a time.

“We sat with the little ones on our knees, packed in tightly. Two tents were always required, and a couple of us would sleep in the car on the seats,” recalls Cynthia. 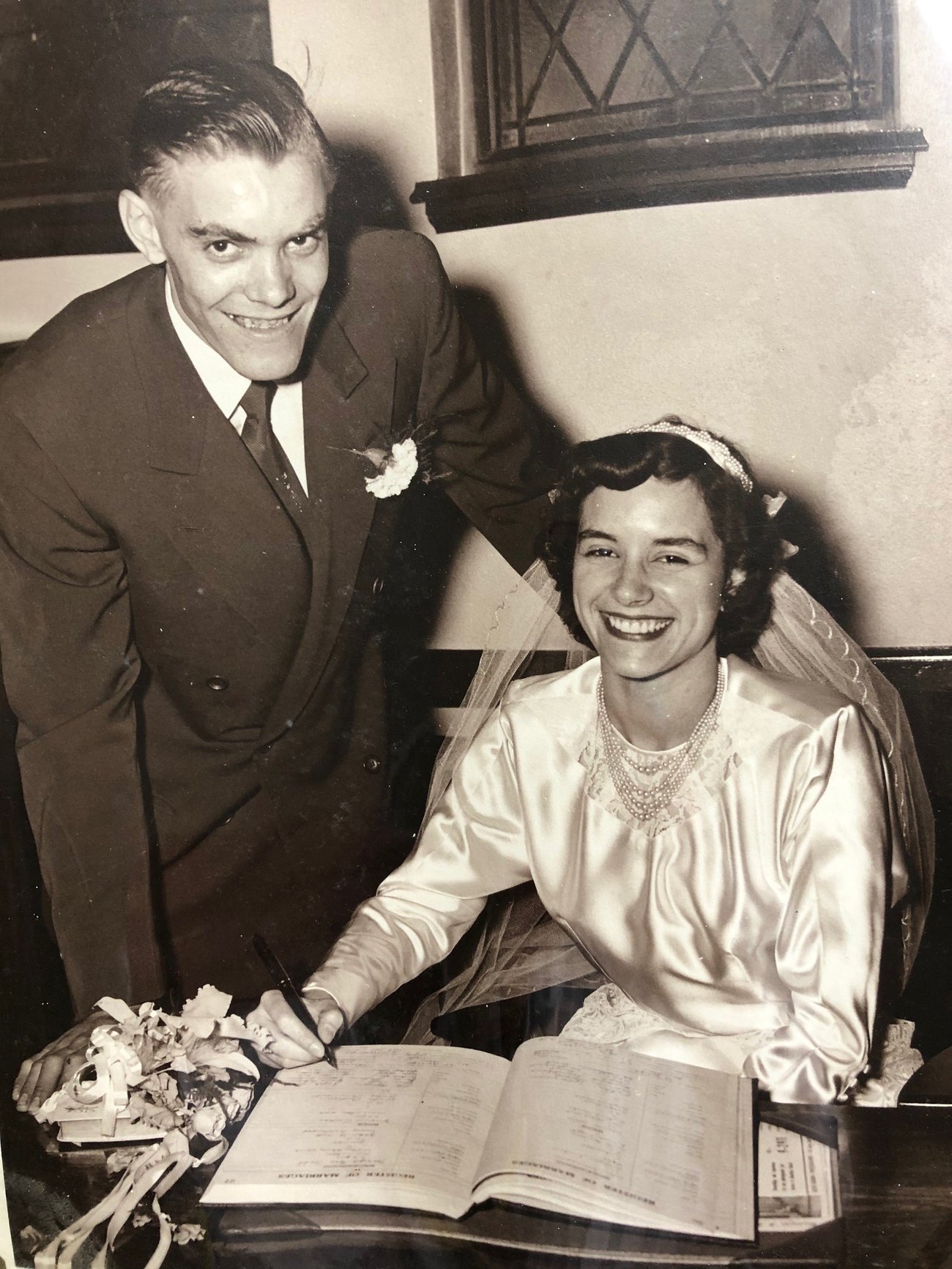 Joe and Yvonne met in a theatre group and were married in 1951. 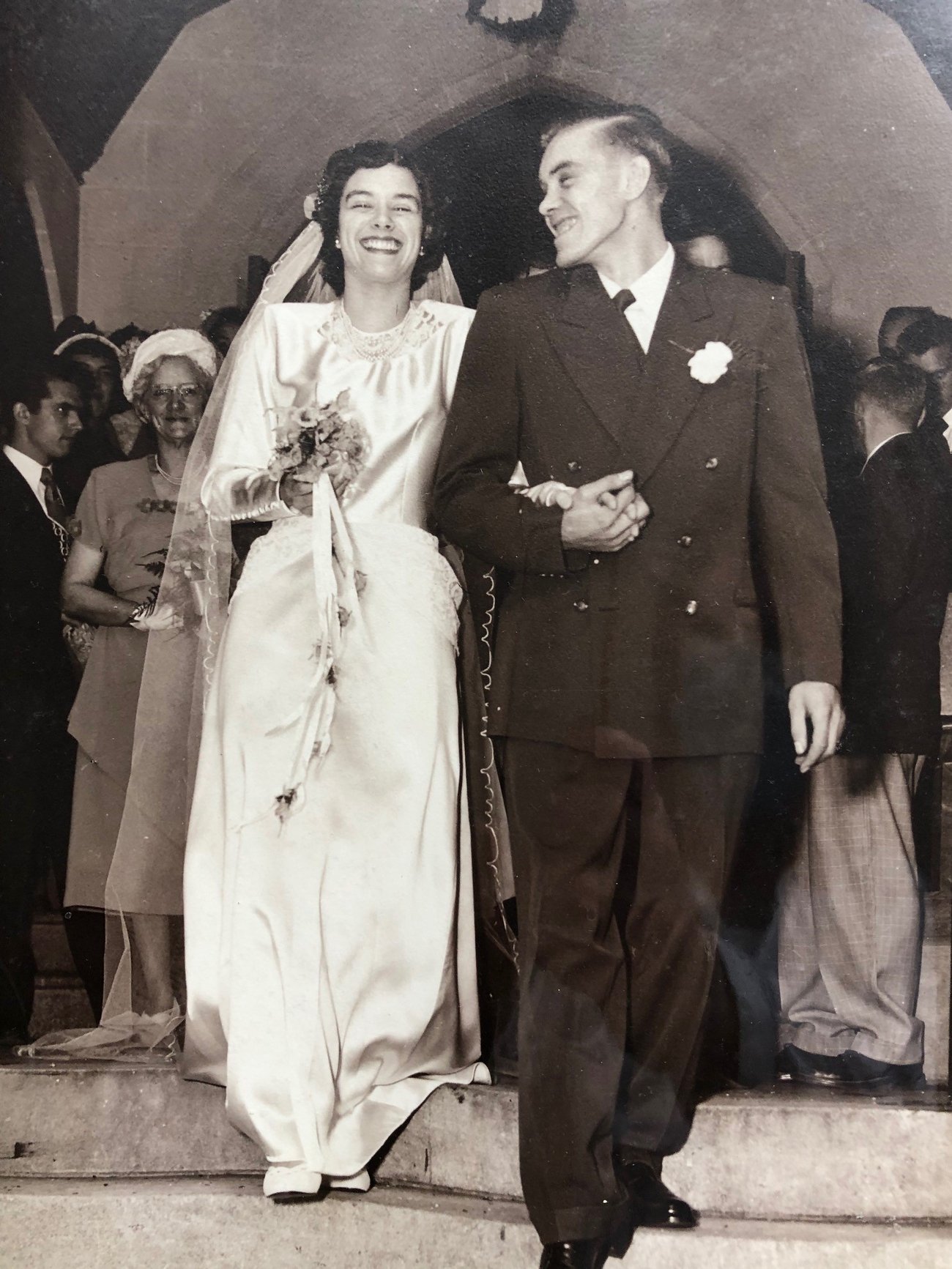 When not on an adventure, the family was dedicated to education.

“We were encouraged to do our best, and homework was done before any other evening activity,” says Cynthia.

That commitment to education “included mom and dad.”

Yvonne went to school to become a social worker when her youngest child was in preschool, and she worked in the mental health field for more than 20 years. She later returned to Newman Theological College and received her bachelor of theology, with distinction, in 1987.

Joe was a journeyman pressman and pressroom foreman who kept educated in a variety of areas in in his field.

Together, Joe and Yvonne also travelled abroad, volunteered and were active in both the Catholic church and the local community. They retired when Joe was 65 and Yvonne was 62. Now the couple have 19 grandchildren and 17 great-grandchildren, with another on the way.

“I still see their sense of adventure and their love of the news and politics every time I visit,” says Cynthia.

Family gather outside the Edmonton General to wish the Sells a happy anniversary.

Joe and Yvonne pose with the banner made by their family.

Claudine Markoja, recreation therapist, echoes that sentiment. “From the day they became residents at the Edmonton General, they have wanted to remain as active and involved as possible, never missing an event.”

For Cynthia, having the chance for her parents to see the banner and their family was really special.

“We were so grateful to the staff for bringing my parents out and helping mom manage the cold so she could stay out longer,” says Cynthia. “They were so kind and really helped make the visit a success!”