When Eugene Guertin faced the decision about whether to fight for his country in the Second World War, his choice was not if, but how.

“I didn’t want to walk all over Europe, so I joined the Air Force.”

Born and raised in the St. Paul area, Eugene was 17 when he volunteered. Four years later, after spending 18 months as a prisoner of war in Germany, he was the only member of his crew of seven to return.

“I’m the only guy out of 21 men,” says Eugene, whose crewmates on two sister planes also all died. “I’m the only one out of the whole bunch who came back.”

Now 98 and living at Villa Marie, a Covenant Care facility in Red Deer, Eugene is proud to have served his country and to share his story. And while he’s thankful that we’re living in relatively peaceful times, he says it’s important to remember history and learn from it so that it doesn’t repeat itself.

“I’m against war,” says Eugene. “It’s a waste of time. It kills people, and it’s not worth the loss.”

After completing his training, Eugene shipped out for England and later Scotland, where he was stationed with the Royal Air Force’s 77 Squadron. He served as a bomb aimer and backup pilot flying Halifax bombers on missions over Germany.

“In the planes we were flying, there were seven people, and that filled everything up with just one pilot. And as far as the bomb aimer goes, his business was when you got to the target. So in between, I used to spell the pilot off flying the plane. On some of those seven-hour trips, you got pretty tired.”

On the night of Eugene’s third and final mission, his crew was not scheduled to fly. But he was at the top of the spare list and was assigned to join another crew.

“The night I got shot down, we were going to Frankfurt. We got hit by a German fighter. The only trouble was that we were on the wrong side of the Rhine River, deep in Germany. If I could have gone over the Rhine River into France, I don’t think they could have caught me.” 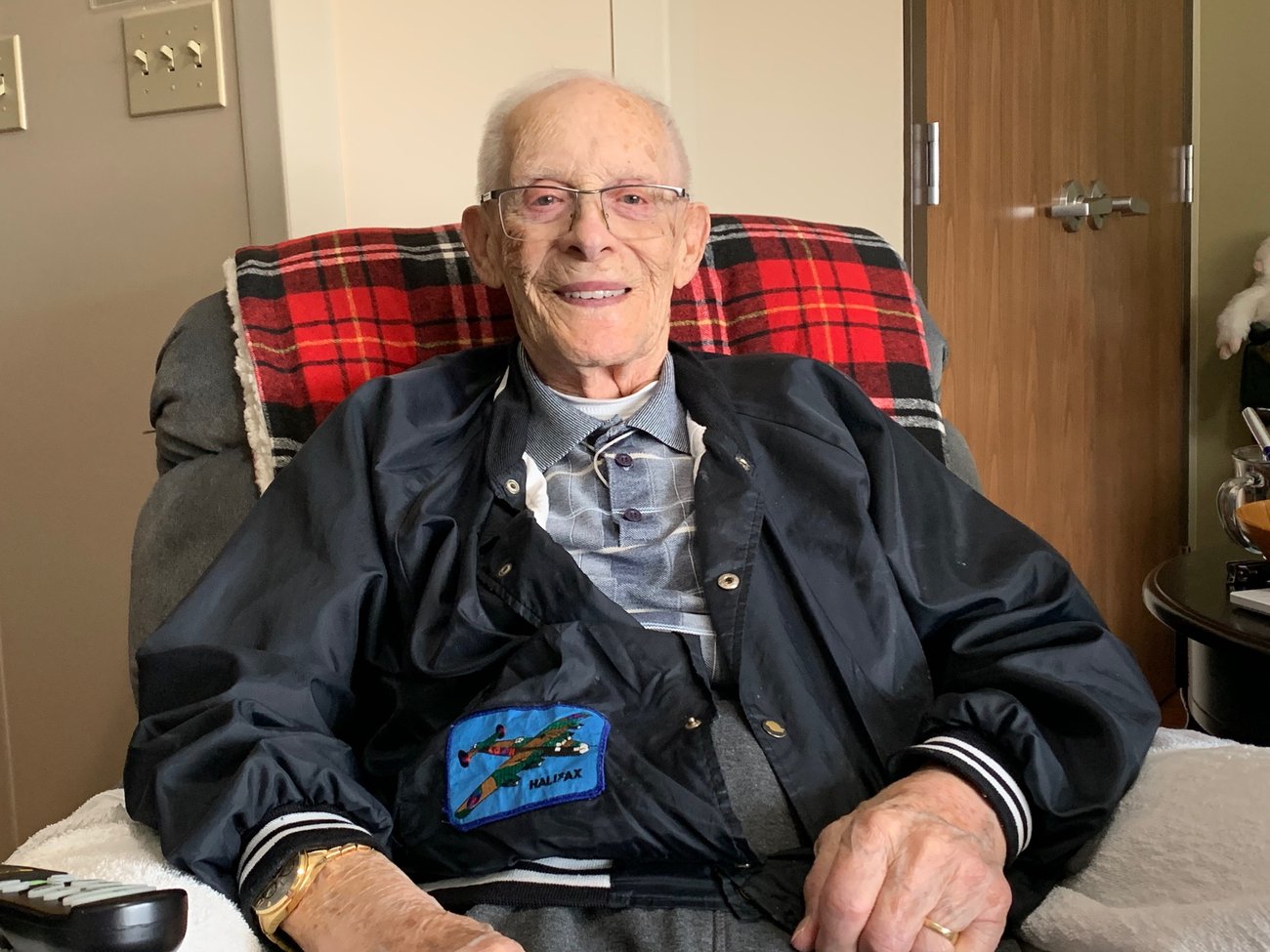 Eugene still has the badge he wore while flying a Halifax bomber on missions over Germany. 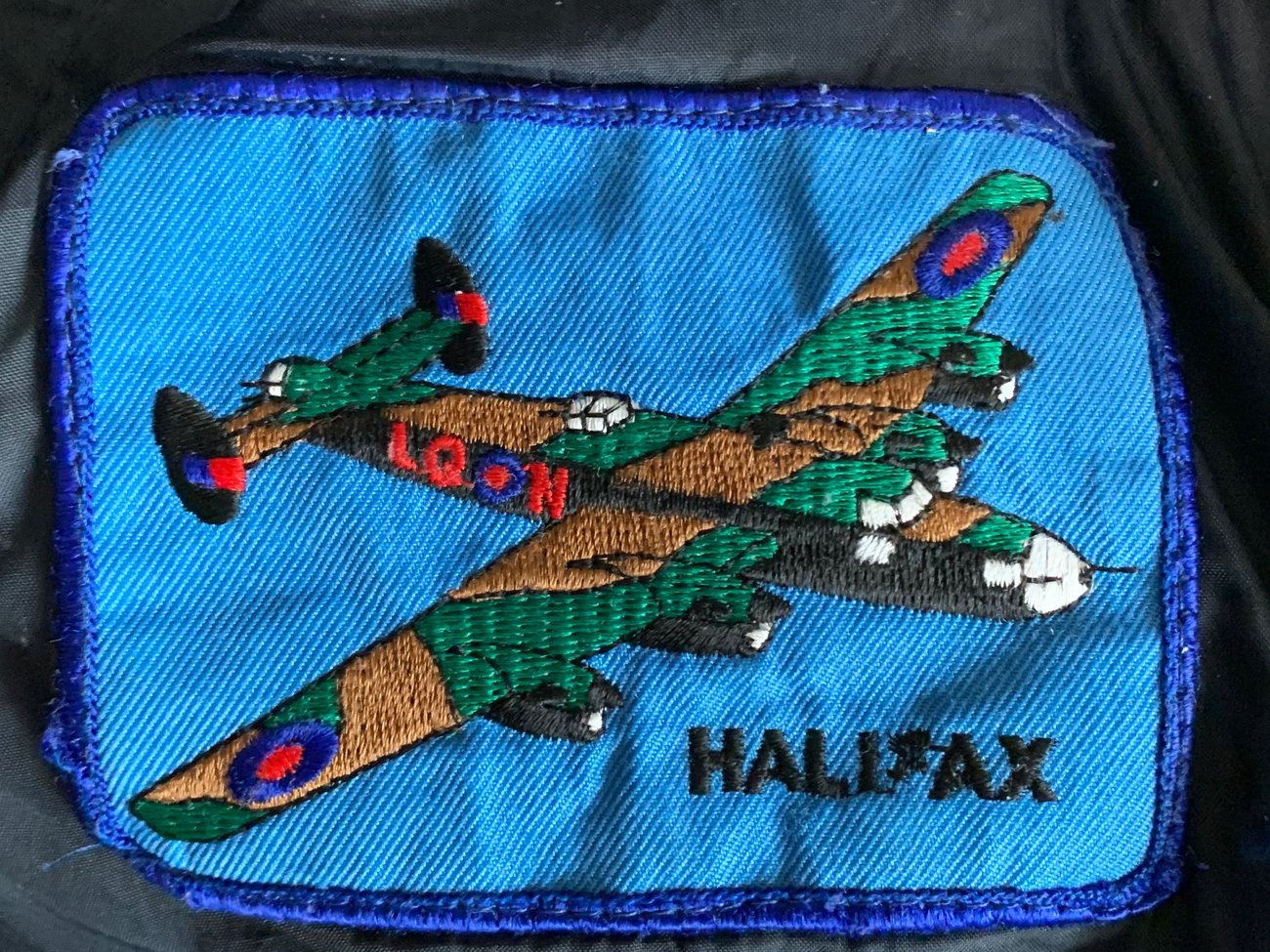 Eugene remembers hitting the ground at 2 a.m. and sleeping the whole next day before attempting to escape Germany on foot.

“And then, just when it was getting dark, I had a choice: I could either go to Spain or France, somewhere in there, or go back and come out by Holland. But I didn’t make it. I was getting ready to go, and a couple of guys walked into me. And for me the war was over.”

Eugene spent 18 months as a prisoner of war at Stalag IV-B, north of Dresden, before the camp was liberated by the Soviets in April of 1945. But he and some other prisoners weren’t sure they could trust their liberators.

“The first thing we did is, we went down and went through the camp office and took all our ID stuff out so the Russians wouldn’t know who we were. And then we heard that they were going to move us east. That gave us visions of Siberia. So when they weren’t looking, we took off the other way.”

Eugene says they knew it was risky, but it paid off.

“It was stupid because the SS was combing the roads, and if anyone didn’t have a reason to be on the road, they shot them.”

Eugene’s group came across three Russians in a large German military truck and played a trick on them.

“They were all happy the war was over, and we got them drunk and laid them in the ditch, and we took the truck and took off.”

After crossing the river and entering American-controlled territory, Eugene continued on to France and eventually home. After returning to Canada, he learned that his crewmates had not survived, including a fellow bomb aimer from his sister crew. They had met in their early days of training in Edmonton and formed a special bond.

“My best friend came from Rocky Mountain House. We went through everything together. Everywhere he went, I went,” recalls Eugene. “You couldn’t have asked for a better guy. And he got taken out in a Berlin run. I didn’t find that out until later, too.”

Shortly after returning to Alberta, Eugene finished high school, started a job at the Bank of Commerce and met the love of his life, Nora.

“Then when the war was over and I came home, the first thing I did was marry a German,” says Eugene. He and Nora were married for 72 years and raised three children. Nora died in December 2018.

A year later, Eugene moved into Villa Marie. He continues to stay up-to-date with news and current events and enjoys watching golf and curling and visiting with his family.

Nurse practitioner Nicki Armstrong remembers her first encounter with Eugene while making her rounds soon after he arrived at Villa Marie. As a former army medic whose family has four generations of military service, Nicki quickly established a rapport with him. She remembers Eugene sharing war stories with her for close to an hour, and she was amazed at what he had been through.

“They walked through most of Germany and part of France in the latter days of World War II,” says Nicki, Villa Marie’s acting site administrator.

As Eugene reflects on his experience, he is proud to have served and to share his story.

“It’s my country. I wasn’t going to have someone come in and order us around. It’s a democracy, and that’s what it should be.”

Nicki says Eugene is modest about his contribution and believes he was just doing his part. She says it’s important to share his story, remember those who fought to defend our freedom and apply the same ethic of service to the challenges we face today.

“These people sacrificed their entire youth and, in huge numbers, their lives. They didn’t come home for six years because they wanted to save the world from fascism because it needed to be done, because it was the right thing to do, because they needed to do their bit.

“There are very few people who can give witness to that. And if we forget the ideals that they were fighting for, we are at risk of losing those ideals.”