A young woman about to enter religious life approached a convent near Mundare, where four Sisters had just moved to a homestead after arriving from the Ukraine. And in the summer of 1903, with their home still under construction, they began their ministry and were ready to welcome their first entrant from their new community.

“When her father saw what the house was like, he was kind of appalled and wasn’t sure he wanted to leave his daughter there,” says Sister Zoe Bernatsky, one of the Sisters Servants of Mary Immaculate. “They had to start from nothing.”

Members of the community helped finish construction, and the Sisters pitched in by plastering the home and clearing brush. They cultivated a garden, grew crops and raised chickens.

The Sisters, who’d been sent to Canada to support Ukrainian immigrants experiencing the harsh realities of pioneer life, arrived in Strathcona (now Edmonton) in November 1902. One of the Sisters died the following May before they moved to Beaver Lake (now Mundare).

“There was nothing much there, except mosquitoes and swamps and that kind of thing,” says Sister Zoe. “I can’t imagine.”

Their early work in the Mundare area focused on building a school and supporting the spiritual and physical needs of the immigrant community. It wasn’t long before health care played a larger role.

When Spanish influenza broke out during the First World War, the Sisters cared for the ill they encountered as they visited and prayed with families, taught the children and raised funds for the school.

“They would go to these homes and people were very, very sick,” says Sister Zoe. “And sometimes a parent had died or both parents had died and the children were there, so they brought the children to the Sisters’ home, where they were cared for and educated.”

The Sisters’ house became a makeshift hospital for the sick, and they were credited with saving more than 300 lives during the flu epidemic, using basic treatments and herbal remedies. A doctor from Vegreville was impressed with the compassionate care of the Sisters and he brought them medicine.

In 1928, the Sisters and the community made plans to build a permanent hospital. While they raised funds, they also sent Sisters to be trained as nurses and one as an accountant. Later, they also had a Sister trained as a lab and X-ray technician, as well as one certified to maintain the boiler system. 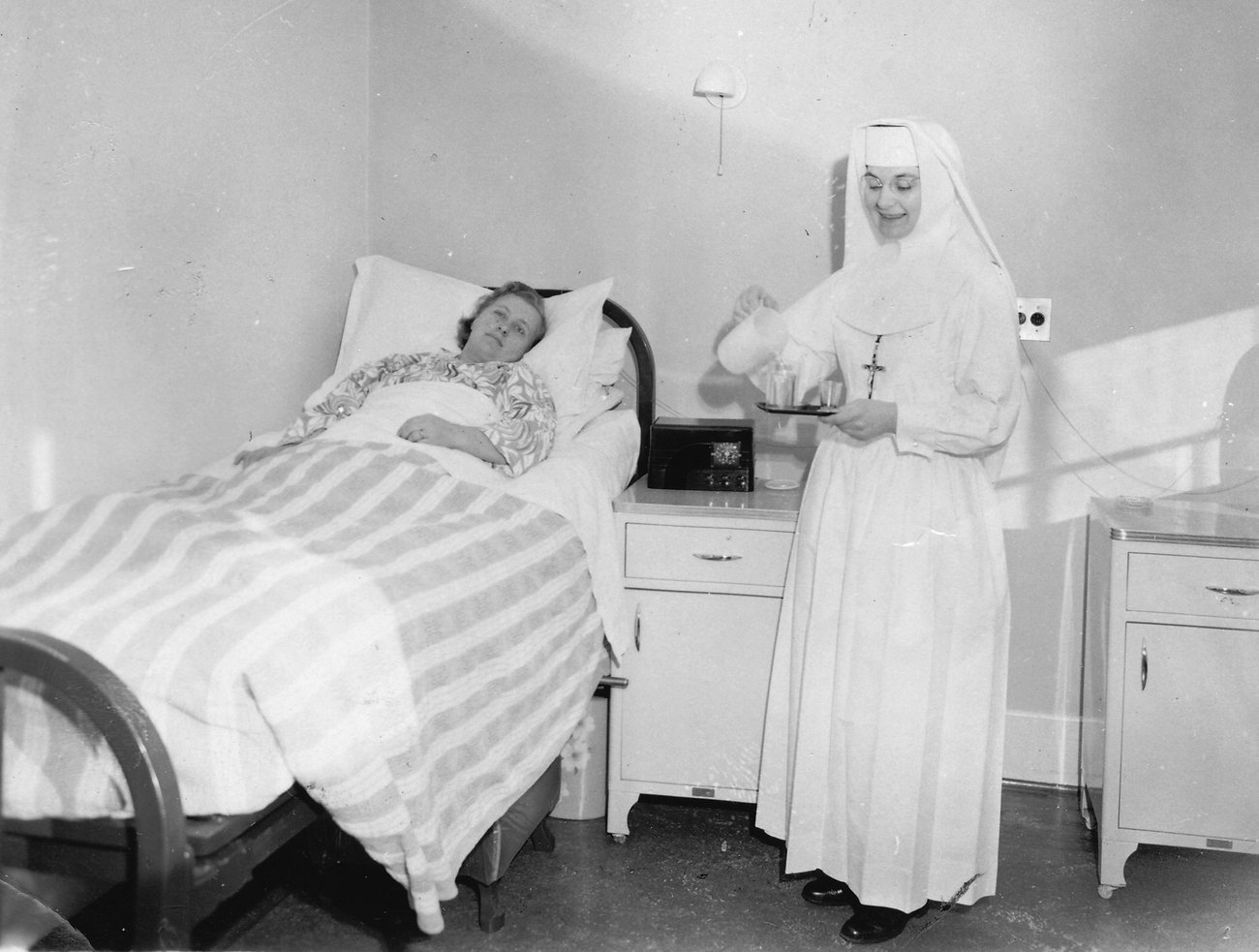 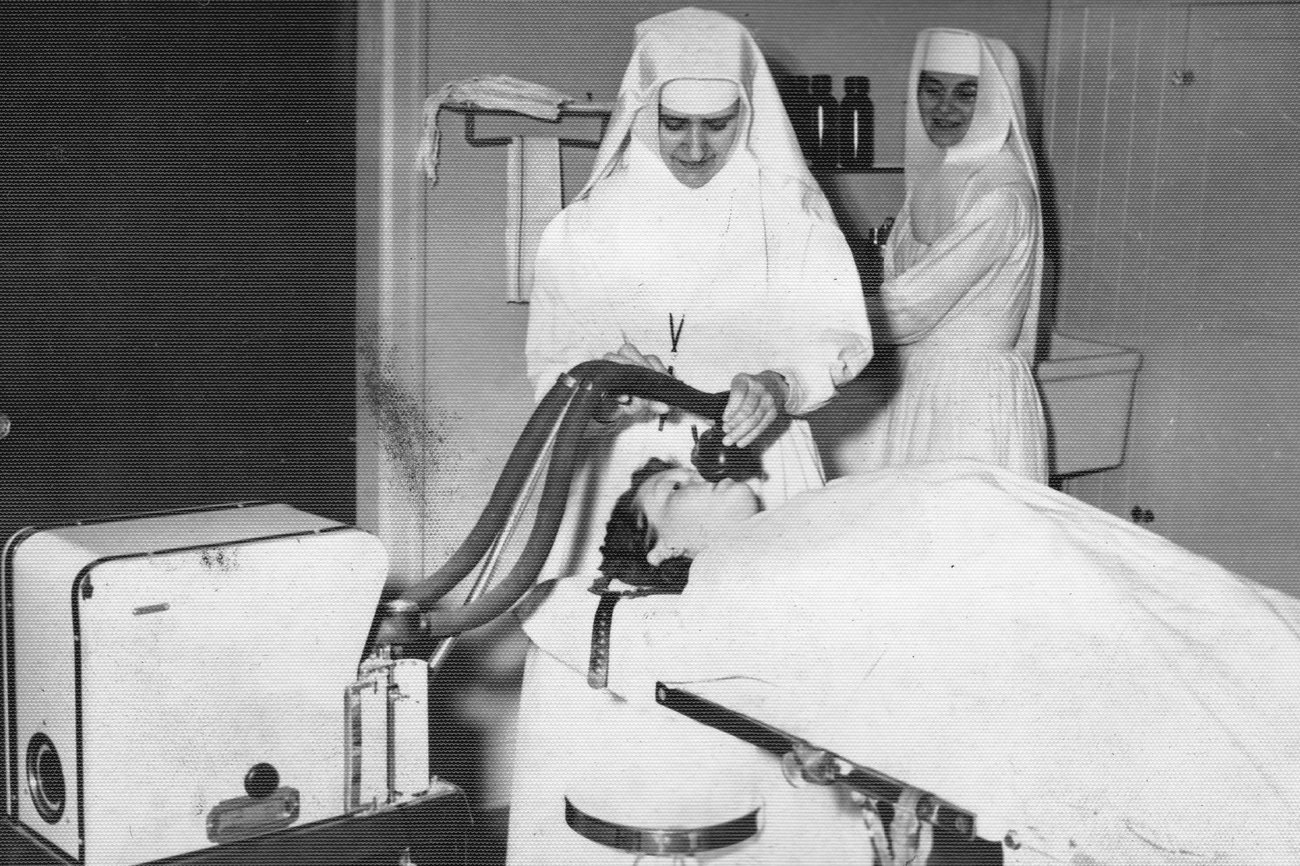 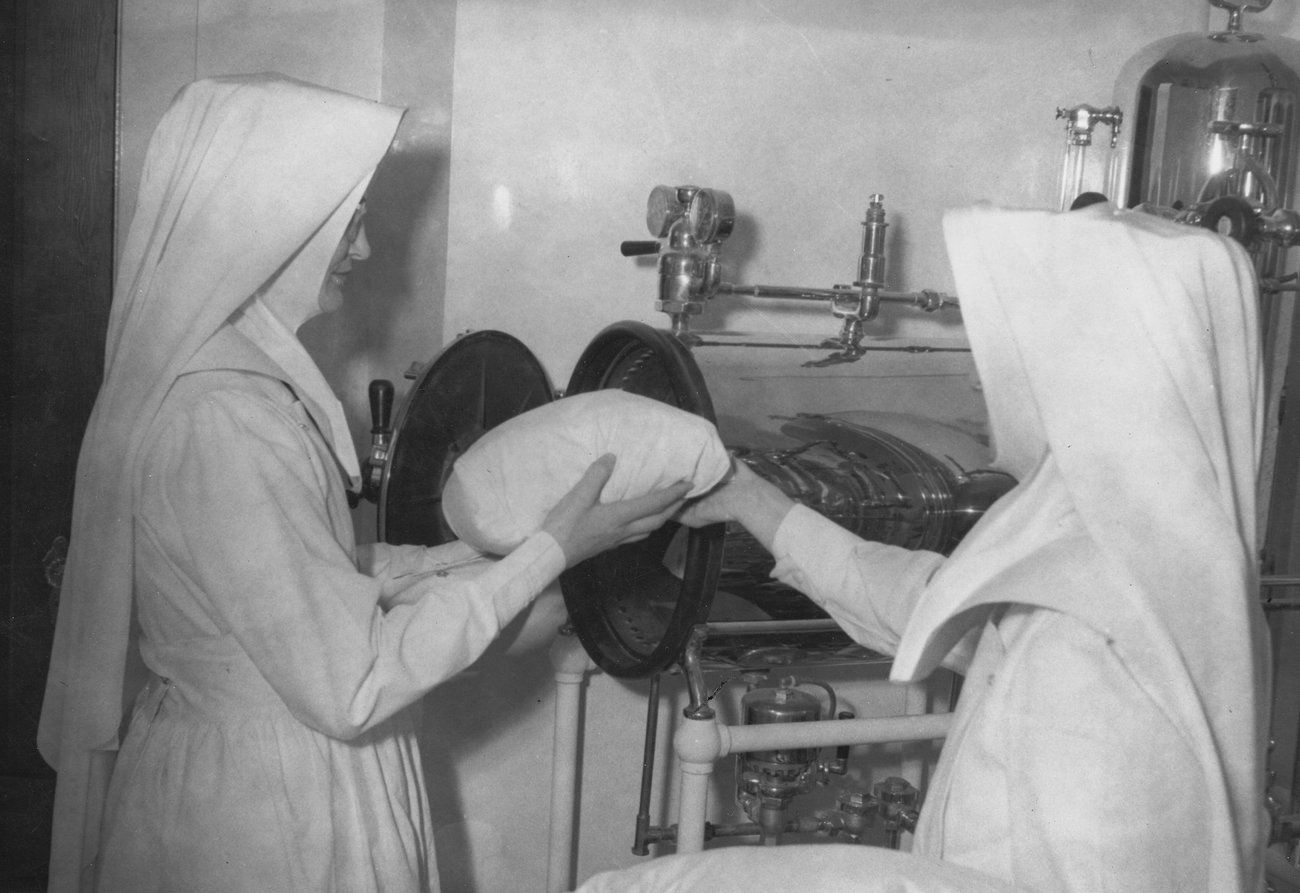 Two Sisters work together in the sterilization department. 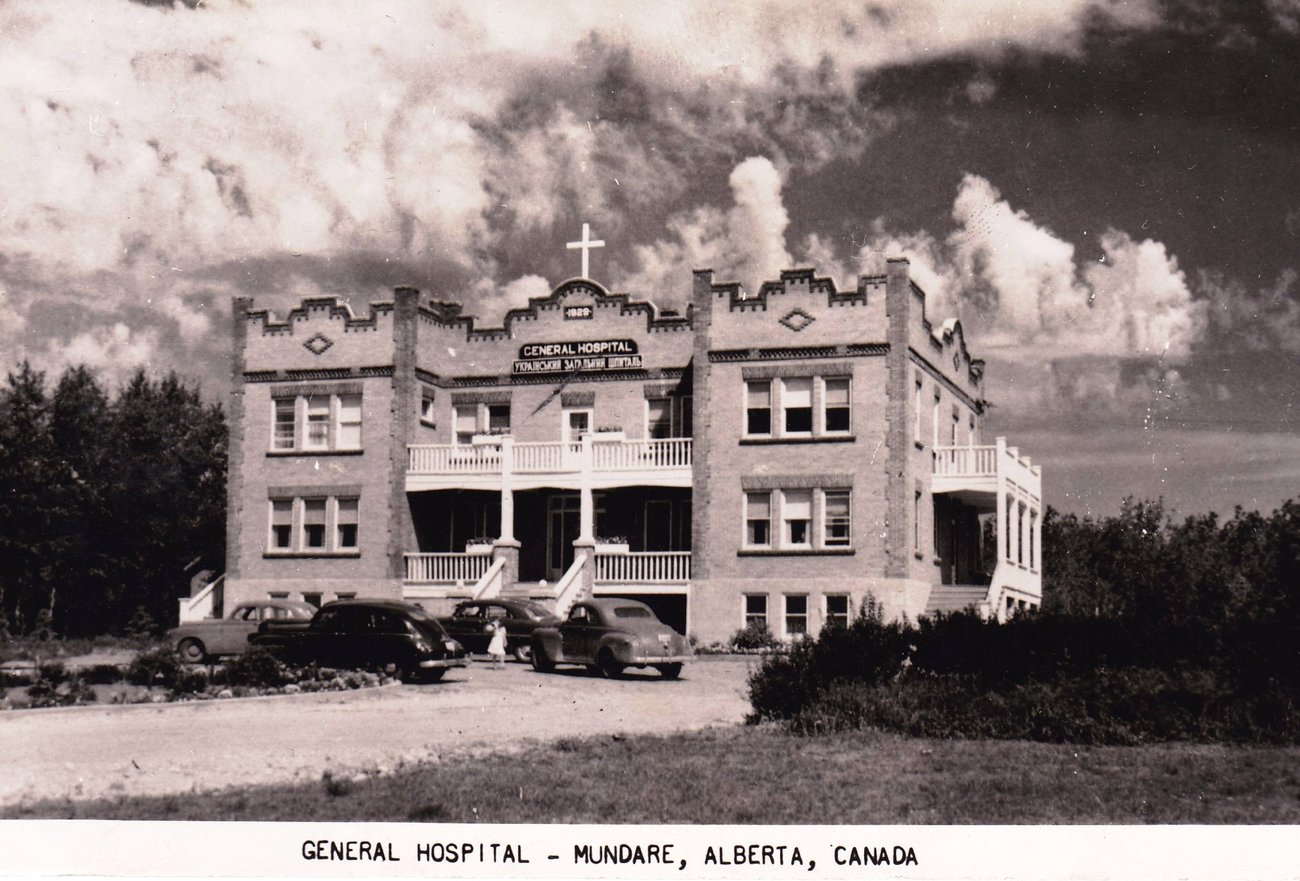 An early photo of the Mundare General Hospital, which opened in 1929. 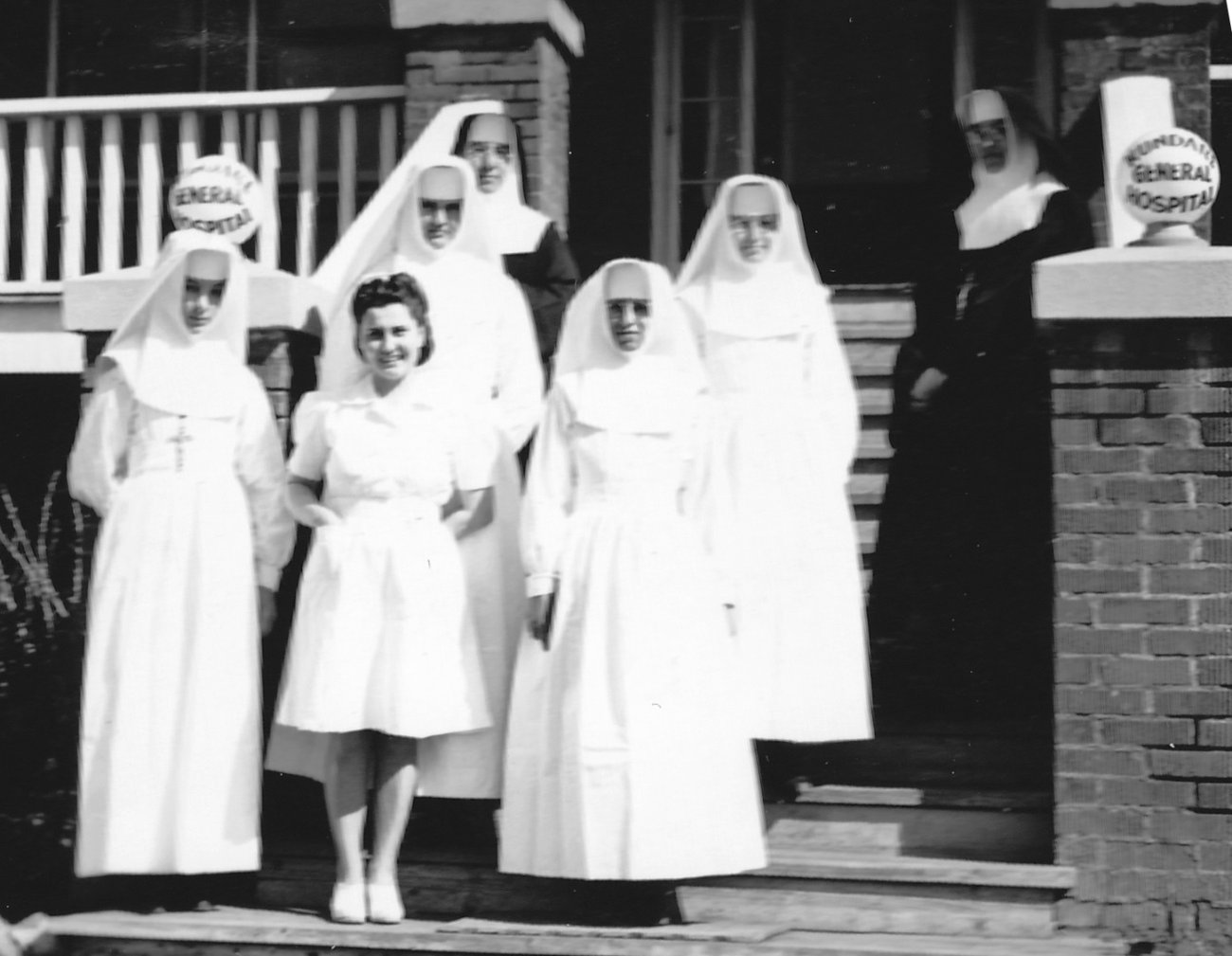 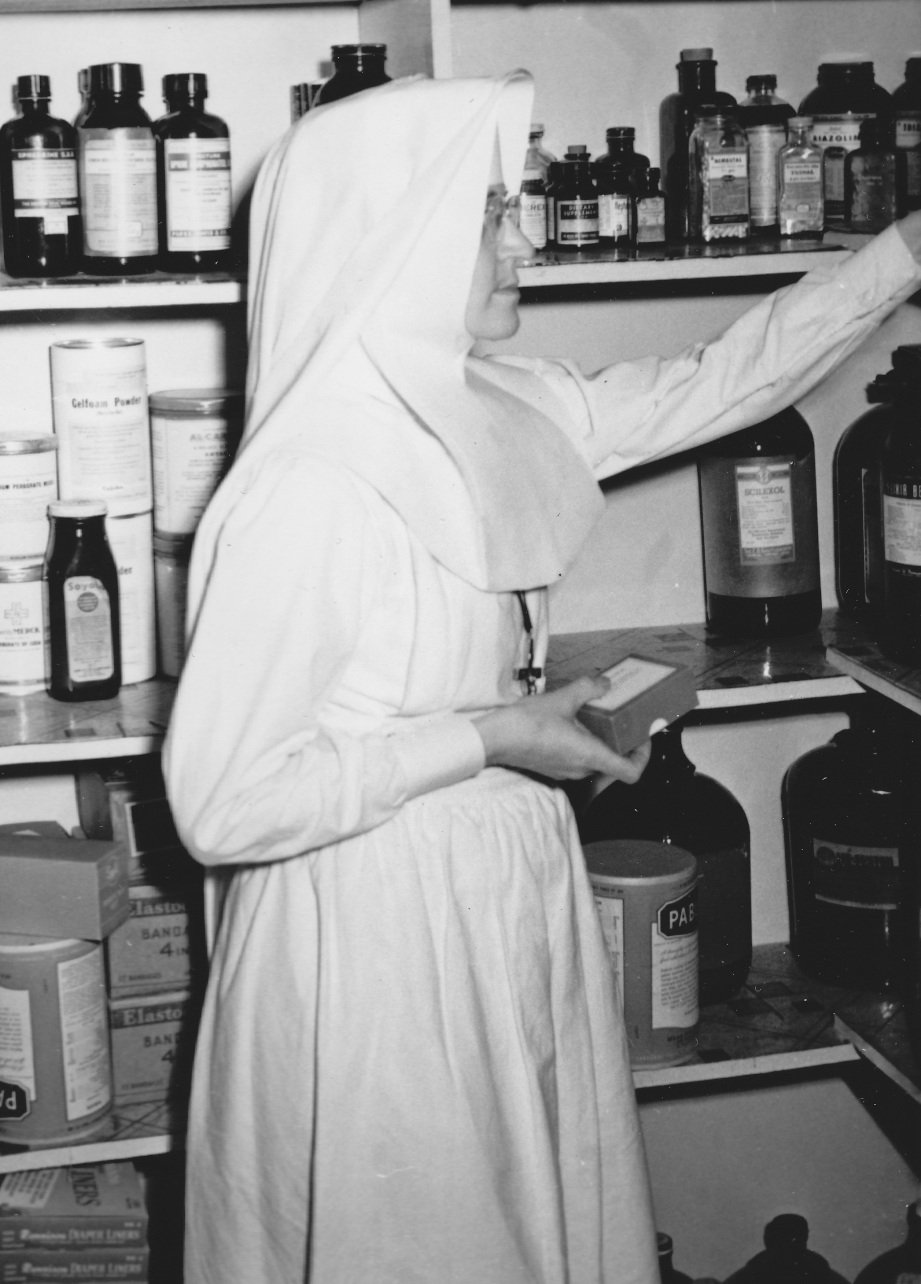 Sister Oreste was well known for her many years of service in Mundare. 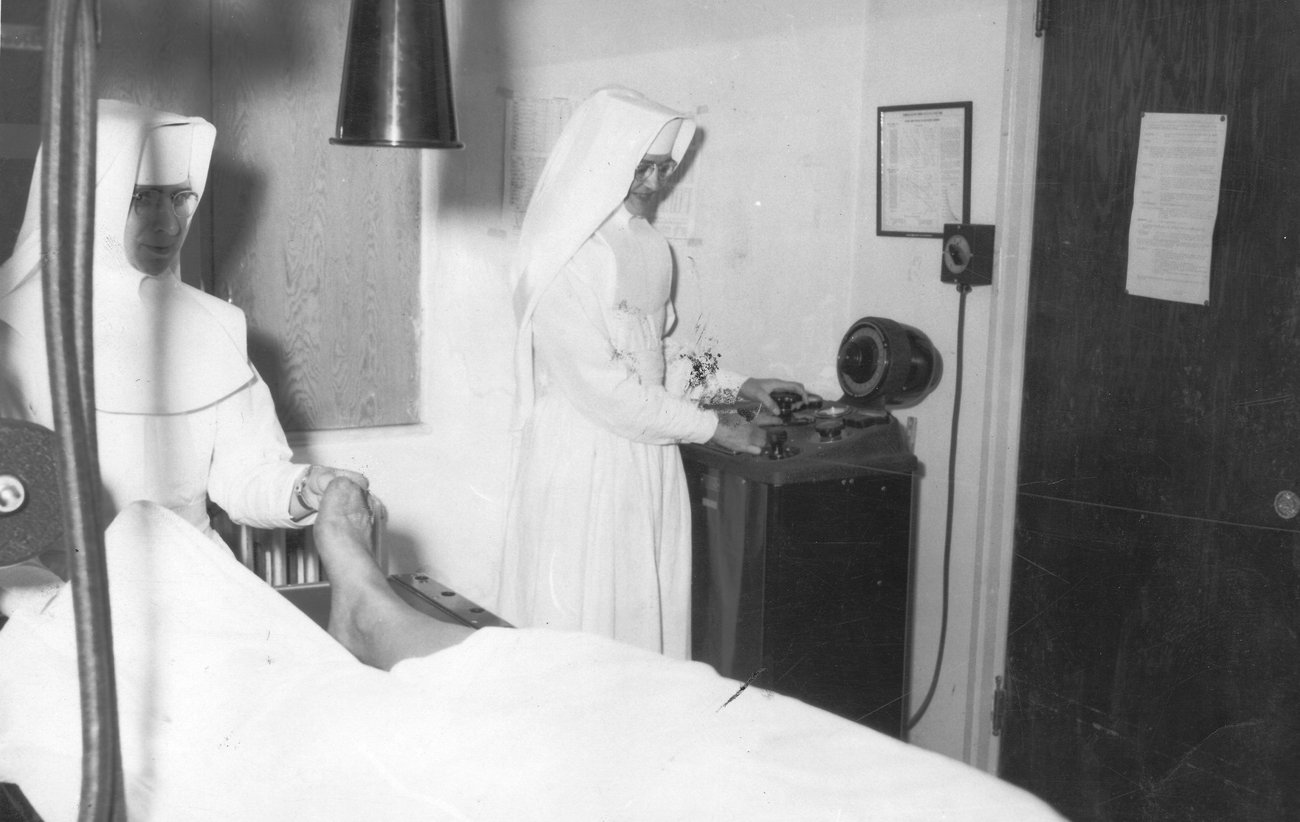 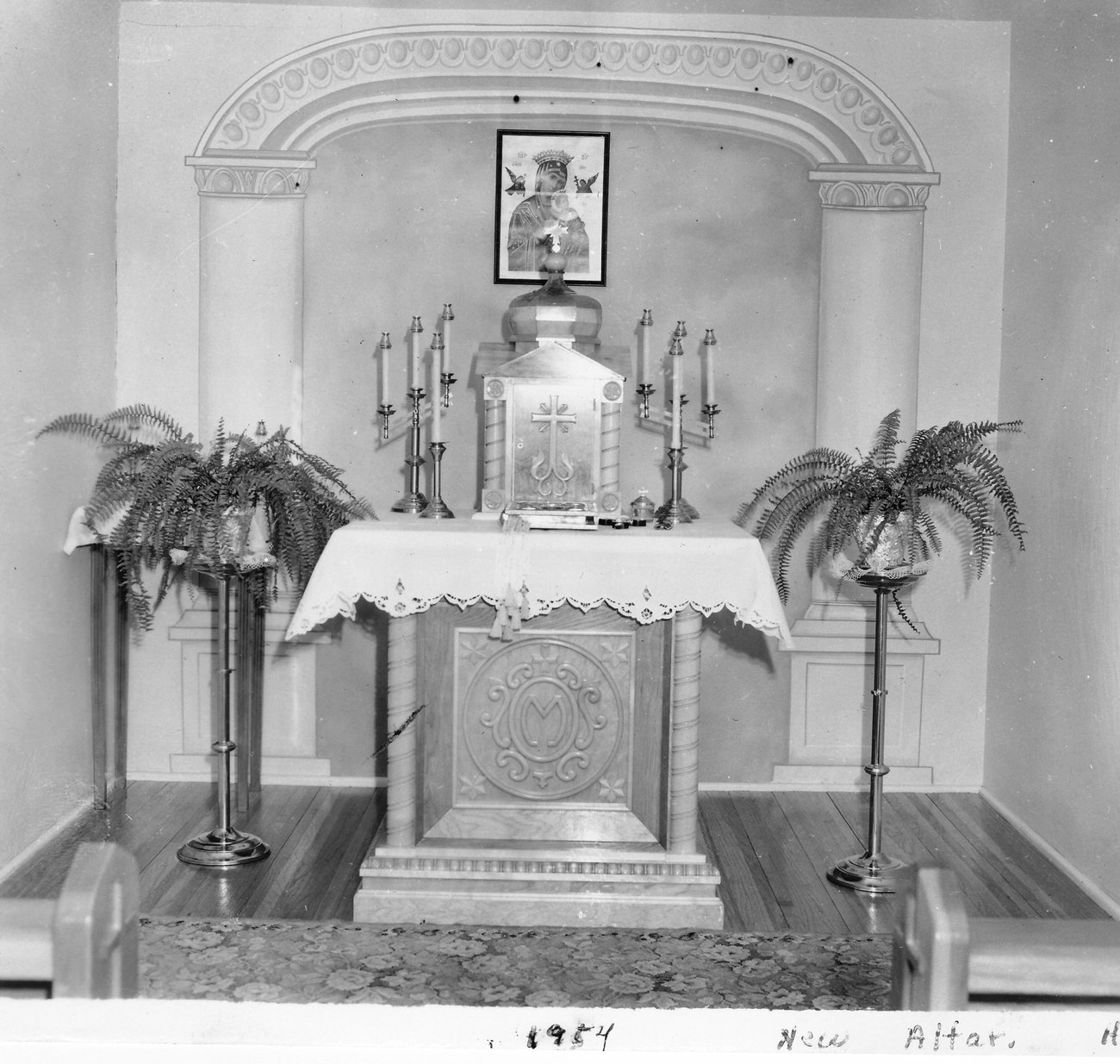 The chapel at Mundare General Hospital, likely in the 1940s. 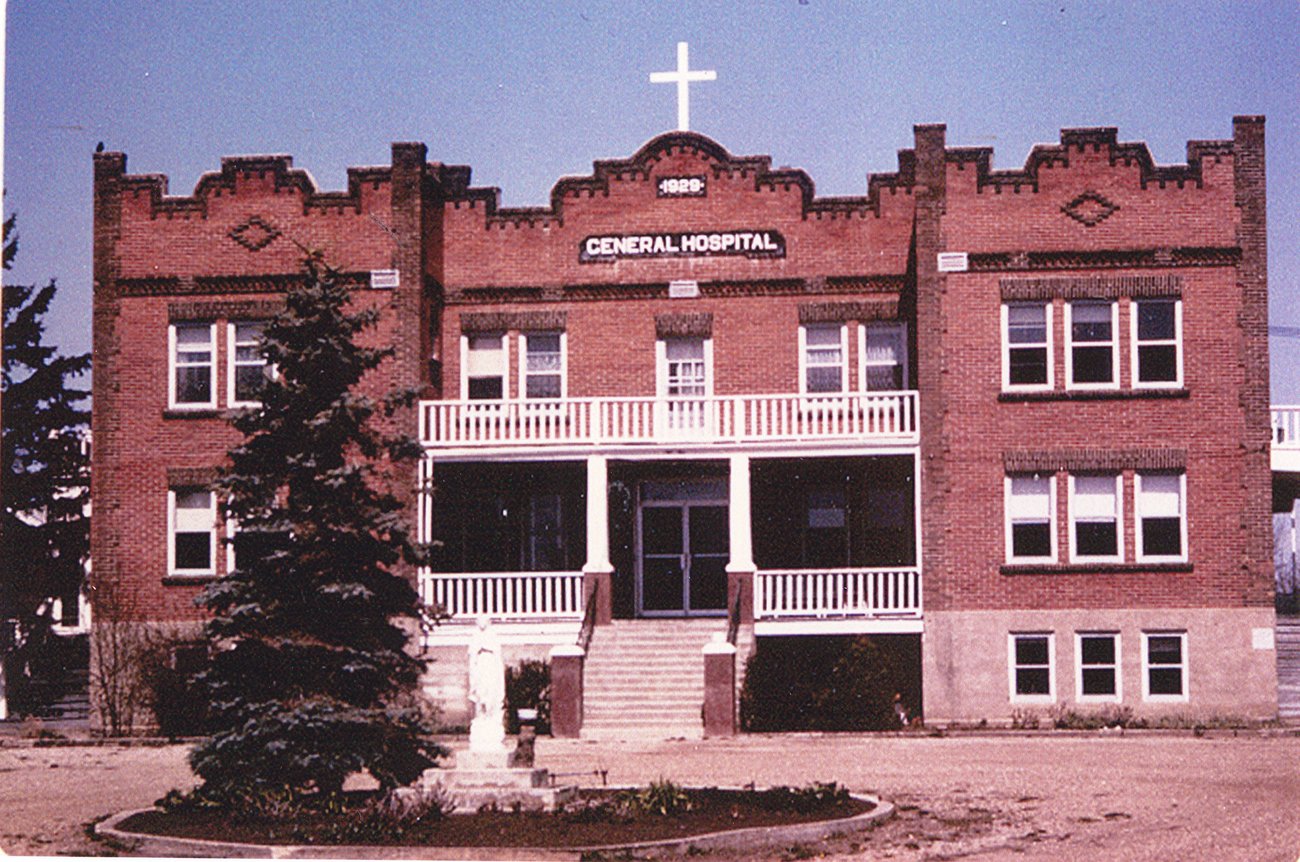 The statue of Mary, Comforter of the Afflicted, was placed in front of the hospital in 1954. 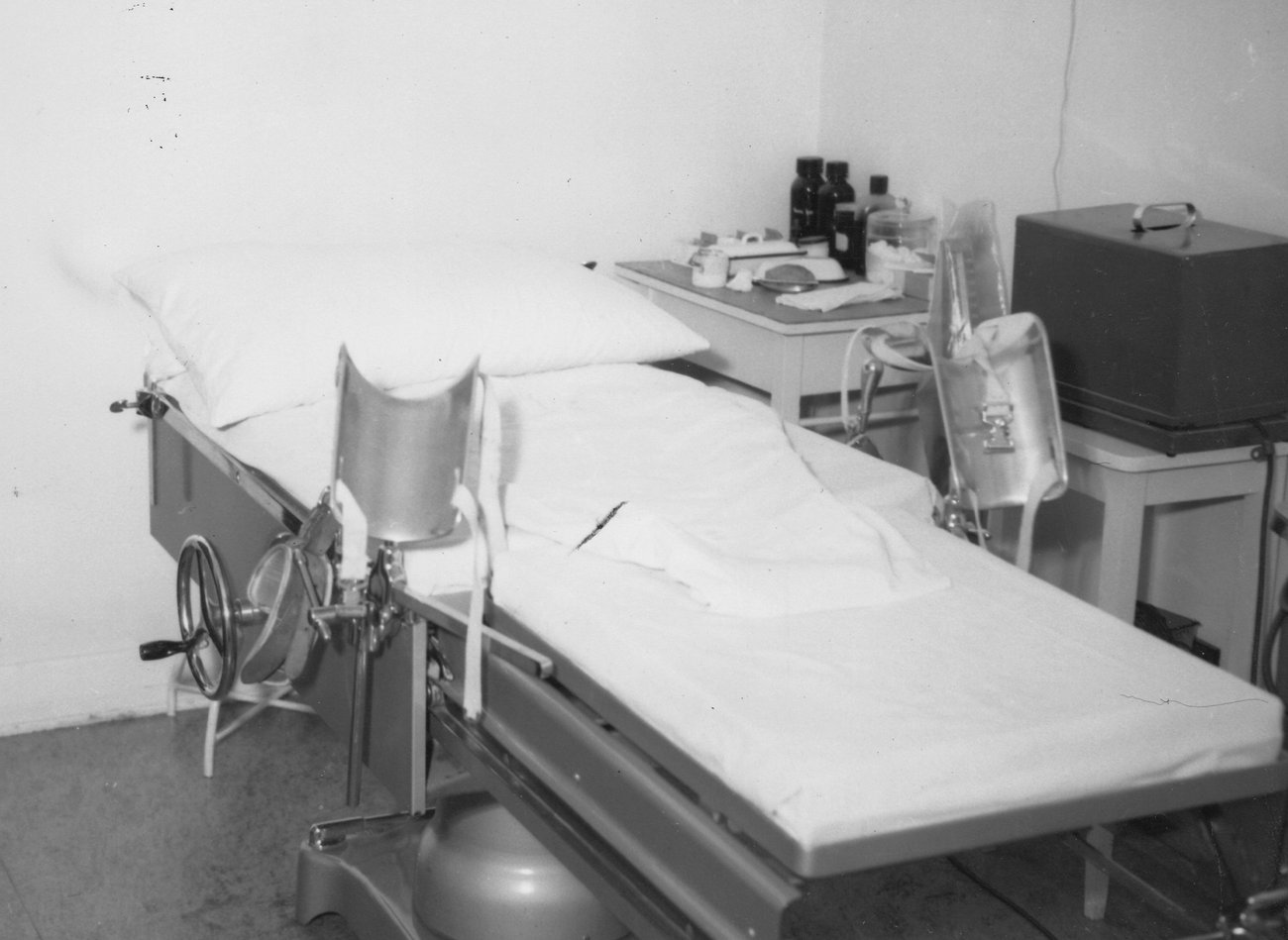 The Mundare General Hospital operating room, likely in the 1950s. 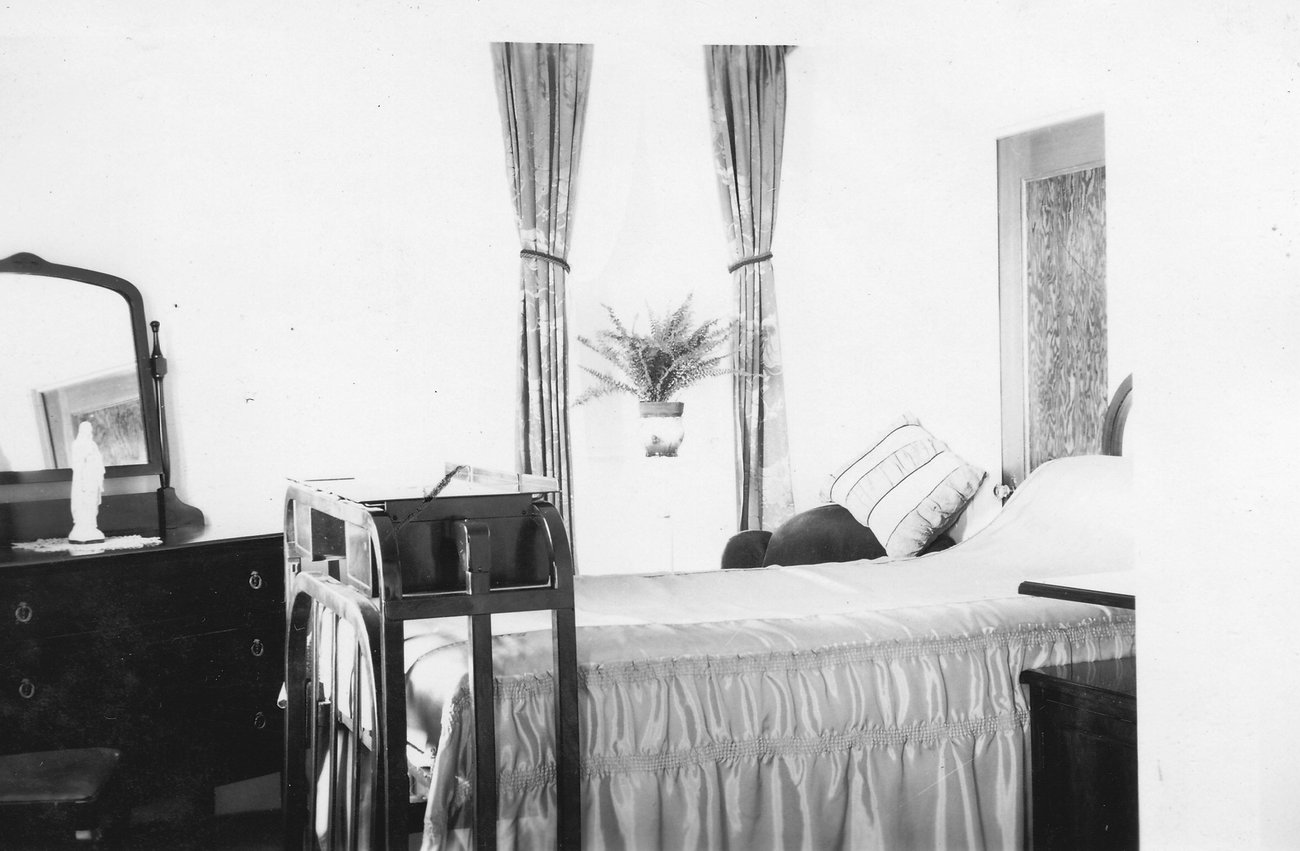 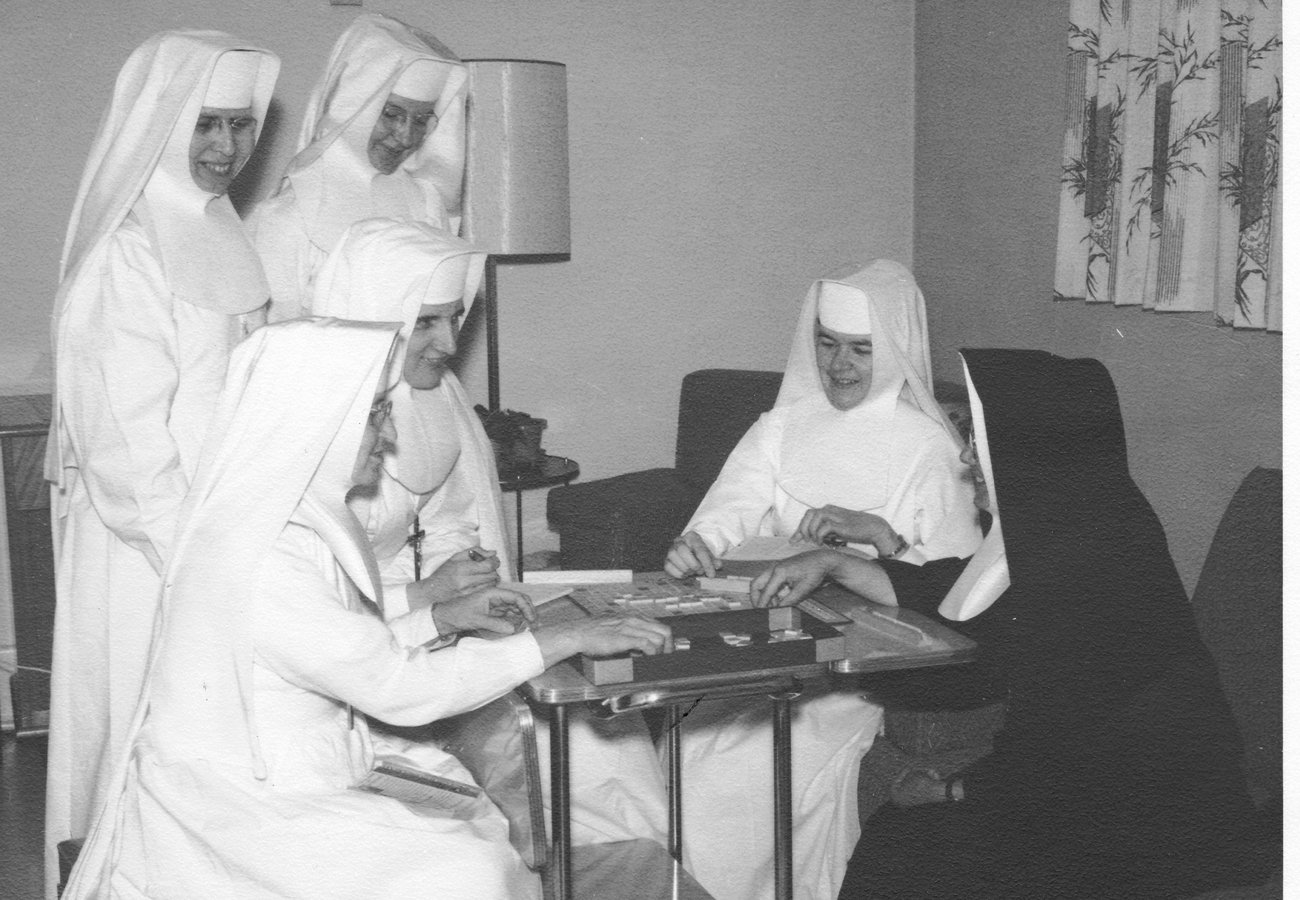 The Sisters playing a game of Scrabble. 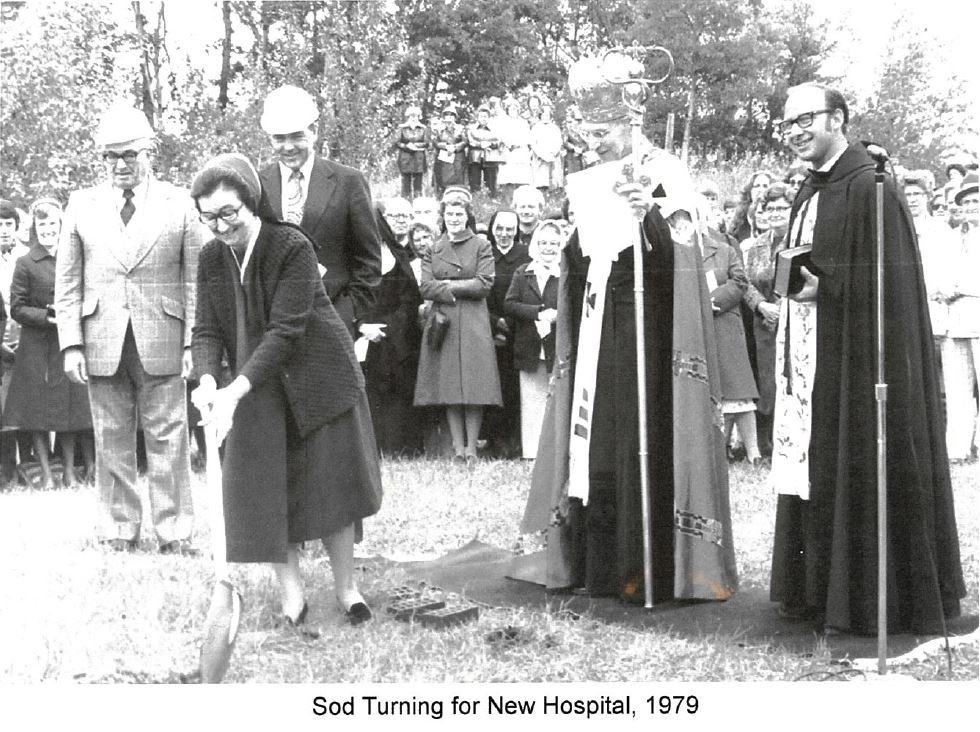 The Mundare General Hospital, now known as Mary Immaculate Hospital of Mundare, opened in 1929. The first physician, Dr. N.C. Strilchuk, worked closely with the Sisters and together they were attuned to the needs of the community, an important factor before there was access to lab testing or sophisticated medical record keeping.

“Everybody was delivered by Dr. Strilchuk,” says Sister Zoe of the physician whose career would span nearly 50 years. “He knew all the families, so he knew if someone had a predisposition to high blood pressure or a stroke. These people really had a sense of what was going on in the community.”

During the Depression, finances were a struggle for the hospital. Those who were able to pay their medical bills would often pay with produce. But the lack of money didn’t mean the need to grow health care stopped. The Sisters were asked to build another hospital in Willingdon, 40 kilometres northeast of Mundare, which opened in 1935.

Sister Stephanie Olynyk served as a nurse in Mundare and Willingdon for nearly eight years, starting in 1967. She remembers Dr. Strilchuk going out on a snowmobile to see patients if they were not able to come to town. And the Sisters were available day or night to assist if someone needed emergency surgery.

The 1970s were another turning point for Mary Immaculate. Work began on a replacement for the aging facility. A 30-bed hospital opened in 1979 to replace the original 24-bed complex.

The Sisters Servants of Mary Immaculate handed over control of the hospital in 2005, but they maintain close ties and some Sisters still live next door at the convent, St. Joseph’s Home. Sister Stephanie moved there four years ago and still goes over to Mary Immaculate Care Centre a few times a week to visit residents, pray the rosary with them and assist with the mass.

“We do still feel connected. The legacy holds on,” says Sister Stephanie, adding that the Sisters share a Ukrainian heritage with many of the residents. “It is good to help people, and we understand them.”

More than a century after the Sisters arrived in Mundare and 90 years after they opened the first hospital, Sister Zoe is impressed by the commitment to support the community.

“They made things work and did a lot of physical labour,” says Sister Zoe, who served as the hospital’s director of nursing from 1987 to 1990.  “And they had the vision to go out and send Sisters to be trained as nurses even before the hospital was built.”

Sister Zoe teaches at Newman Theological College and still works occasional nursing shifts at Mary Immaculate. She says it is a privilege to work in health care and accompany people in their time of need. And she says the dedication to service in Mundare remains as strong today as it did with the founding Sisters.

“We do what we do because we’re entrusted with a mission. It’s not just our mission, it’s a mission to share, it’s Christ’s mission to the world. And however we can contribute in the time that we’re given, we do. And then we’re grateful to pass on the mission that it may continue.”