Nurses inspire a single mom to fulfill a dream

On a chilly April day, 19-year-old Alanna Ash drove herself to the Misericordia Community Hospital. Alone, and on her own, she was about to have a baby.

“I was there by myself. I was very scared. I didn’t have a partner or boyfriend. He felt he wasn’t in a place that he could be a parent,” recalls Alanna.

Along with the normal concerns a mom-to-be has about delivering a baby, the teen, who had just a few months of Grade 10 education, was worried about the care team’s reaction to her. She’d endured plenty of judgmental reaction throughout her pregnancy.

“When I was there in the delivery room, I didn’t feel any of that,” she recalls.

"The nurses were just beyond kind to me. They treated me with respect. I remember one of them when I had contractions and I was walking and she grabbed me and started spinning me around, dancing with me and laughing and it made me laugh. They were just so kind. I didn’t feel alone. I felt safe.”

The experience had a profound impact. When Alanna held her beautiful, 6 pound, 15-ounce son, Andrew, several hours after he was born on April 7, 2000, she found the inspiration to answer a call she’d dreamed of as a child.

“Being a nurse was something I wanted as far back as I can remember. I remember saying I wanted to be a nurse when I was five years old. But as I got older I realized I was nowhere even close to having the academic qualifications to do that. It was an unreachable pipe dream to be a nurse. It was almost like saying ‘I want to be an astronaut one day,’ ” she recalls.

But as she held Andrew, Alanna, who’d been working part-time as a restaurant server and in retail, finally felt she could change her life direction.

“When I was holding him, there was this all-encompassing love. I was just staring at him and I thought I need to do something to make him proud. I wanted him to be proud and say, ‘Yes, my mom’s a nurse.’ I wanted to be able to impact people like these women had me.” 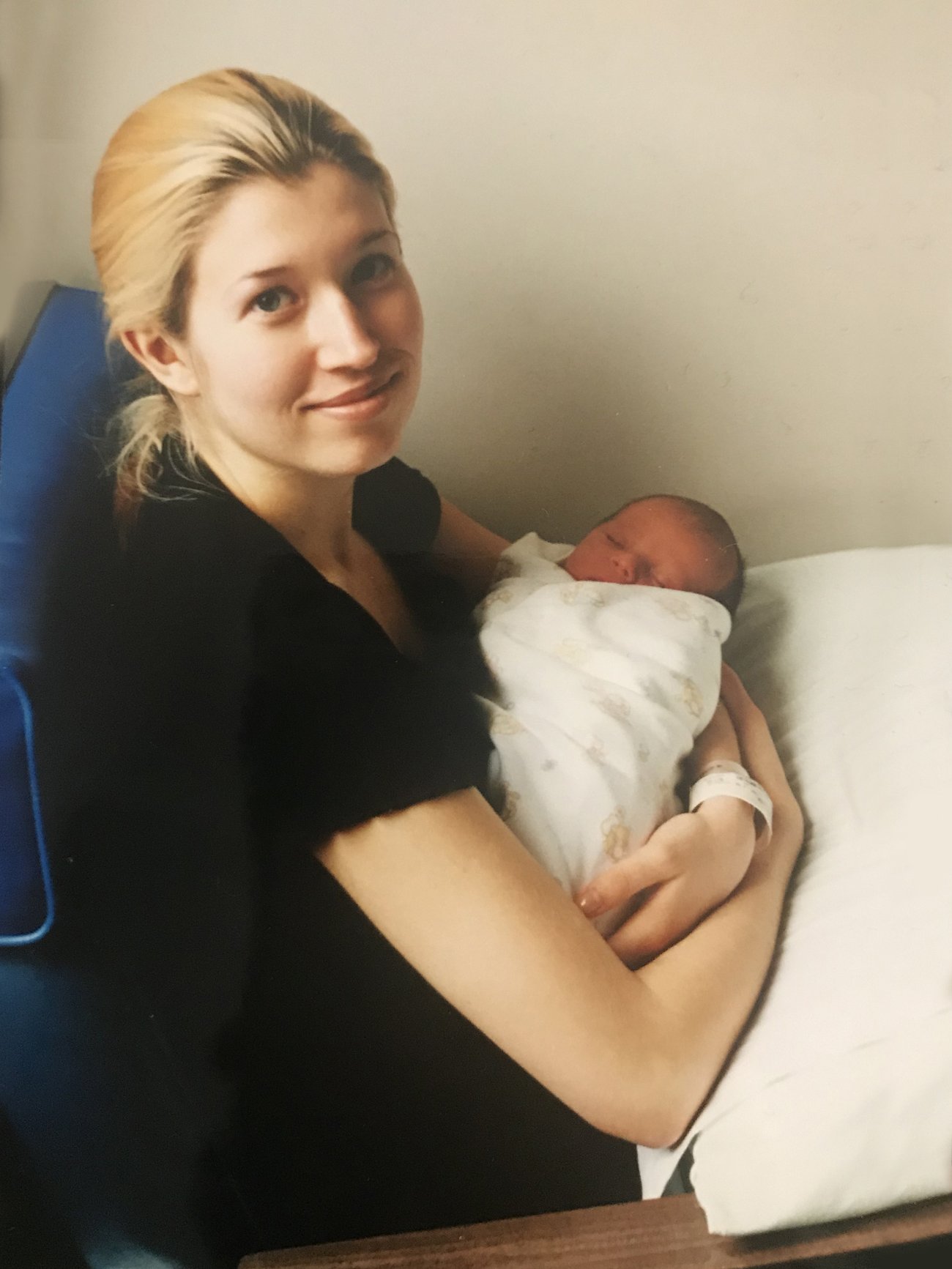 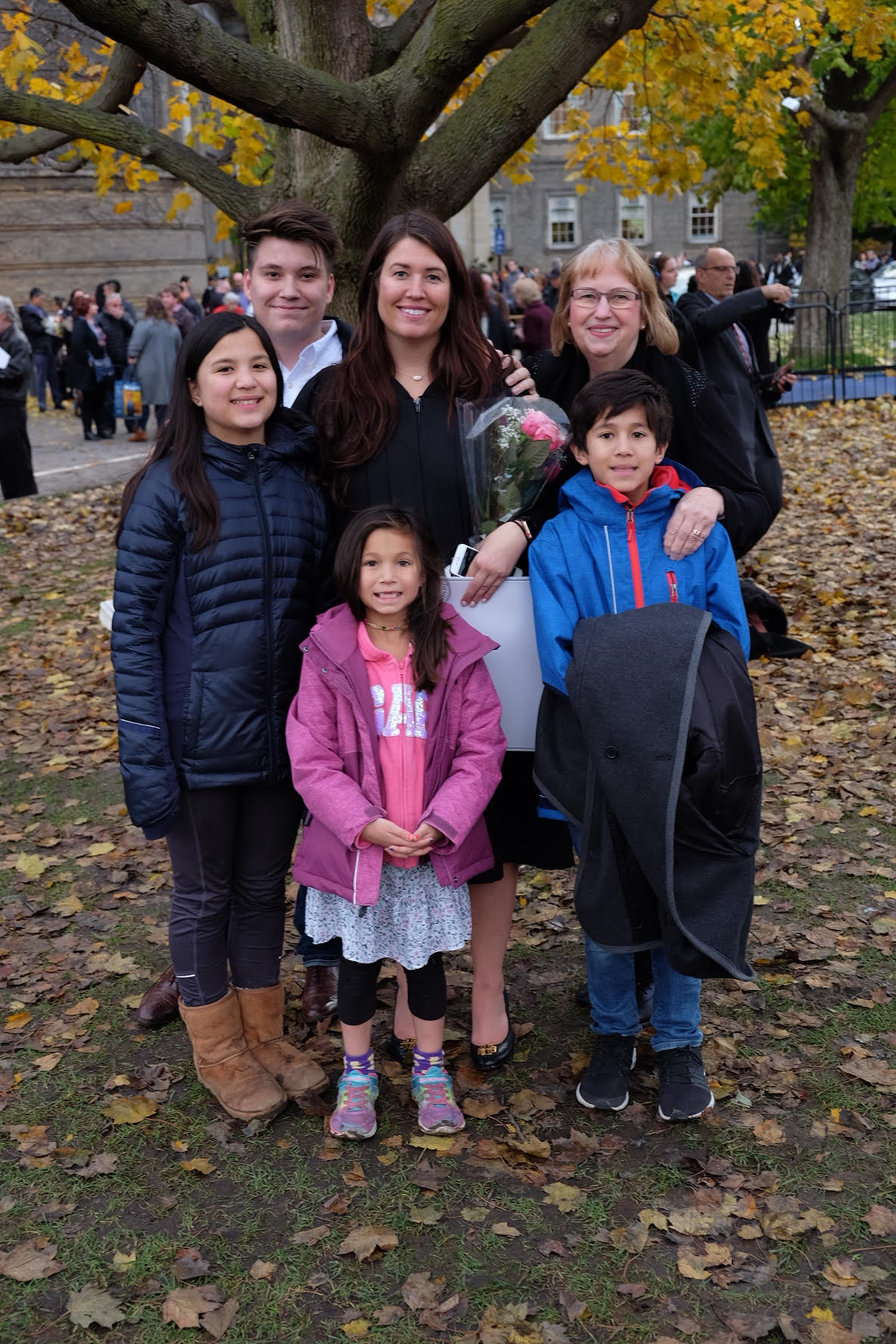 Alanna with her four children and mother at her graduation.

During her entire stay, the care team’s kindness stayed with Alanna. A social worker at the Misericordia hospital spent time with her, asking about her school goals and provided options for Alanna to complete high school. Her parents supported her return to school and her post-secondary studies.

Today, Alanna has come a long way since she held her firstborn and promised she would make him proud. She obtained her nursing degree and didn’t stop there. She continued on with her studies, including earning a master’s degree, a post-Masters Nurse Practitioners program and says she may one day pursue a PhD. Currently, Alanna is a nurse practitioner in pediatrics at the Stollery Hospital.

Alanna met her husband while they were working at a hospital and the couple had three children – Emilyn, 13, Calum, 12 and Isla-Grade, 9, who wants to be a nurse practitioner like her mom. Alanna looks back at how far she’s come in the past two decades.

“I kid you not, I still almost weekly have dreams that I can’t finish high school.”

About two years ago, wanting to help others, Alanna started a $500 annual scholarship for a single parent studying nursing at MacEwan – where she obtained her nursing training. While she excelled academically, she says there were challenging days of juggling parenting and studies. “It wasn’t easy.”

When she became a nurse, she knew she’d found the right profession. Her first nursing job was at Covenant Health’s Grey Nuns Community Hospital.

“I consider it where I ‘grew up’ as a nurse,” she says. “When I left my position five years later, I had grown a great deal professionally. I still had much more to learn, but had developed foundational nursing skills and a love of research and evidence-informed practice which I learned there. I still think of the Grey Nuns hospital fondly, and genuinely, it set the standard in my mind as to what multidisciplinary care should look like.”

In her current role in pediatrics, she looks for opportunities to share the kindness she received from the Misericordia labour and delivery team.

“It’s on my radar to be supportive,” she says. “I want to help other parents in a completely non-judgmental way.”

Encouraging others to believe in themselves is important, says Alanna. “If there is something you truly want to do and it is your dream and passion, even if it seems miles away, that it’s one step at a time,” she says. “If you’ve given your absolutely best shot then you can’t have regrets. There isn’t a set course for everyone. Everyone takes different paths.”

Alanna still has a picture where she is holding Andrew taken on the day when she decided to become a nurse.

“It is an incredibly special photo to me,” she recalls. “The people in obstetrics and postpartum impacted me so greatly, they literally changed the course of my life and my children’s.”