As the facility chief for women’s health at the Misericordia Community Hospital, Dr. Amanda Kim wanted to reduce wait times and help women have better access to minor gynecological procedures. So when she heard that health centres outside Alberta were offering more services to women as outpatients, she and her colleagues decided to pilot an expanded day surgery program at their facility, becoming the first team in the province to move in this direction.

“I think the pandemic has shown that women bear a disproportionate amount of responsibility when it comes to family and close relatives, and oftentimes they don’t take care of themselves very well as a result,” says Amanda. “This [program] would in some small way help some women take care of some things for themselves so that they are better able to take on those burdens and responsibilities.”

The program pilot, which took place over a three-month period earlier this year, focused on performing hysteroscopies under sedation rather than general anesthesia. Hysteroscopies are low-risk procedures in which surgeons use a small camera inserted in a patient’s uterus to take tissue samples; check for and remove polyps or fibroid tumours, which can cause postmenopausal bleeding or infertility; or prevent bleeding for women suffering from heavy menstrual periods. The pilot also included insertion or removal of intrauterine devices.

“The goal of this surgical initiative was to implement a new model of care that expanded capacity for day surgery gynecological procedures using sedation while freeing up space for other major surgeries in the main operating room,” says Carol Price, operating room program manager.

The criteria for eligibility were strict, says Helen Mackay, a staff nurse in the operating room. The pilot was open to low-risk, relatively healthy patients with few pre-existing medical conditions. Patients also needed to be comfortable with having surgery performed under sedation rather than general anesthesia.

“They had to understand that it wasn’t going to be a full anesthetic experience and if that was what they really needed, they were a better candidate for the operating room,” says Helen.

Organizing the pilot required collaboration from several different teams at the Misericordia, says registered nurse Heather Lanouette, who was one of the clinical nurse educators for the new program. Their tasks included establishing the equipment, space and staffing needs for the program; designing and delivering training for both the nurses and physicians; creating eligibility criteria; and developing scheduling.

Part of the training was learning the new workflow pathway the team researched and developed for the procedures. “It’s a slightly different environment than in the main operating room and a small team working together,” says Heather.

Because the procedures required fewer resources, the nurses and physicians found they were able to treat more patients in a shorter time. They began by seeing six patients a day, but by the end of the pilot, they were treating as many as 10 patients as they tweaked the workflow and became more efficient with the caseload, says Heather.

The response from patients has been positive, says Amanda. “The majority of patients have been really grateful to have [the surgery] done and not have the delays.”

For patients being checked for cancerous or precancerous changes in tissue, for example, the shortened wait times have meant less delay in evaluation.

“It’s quite nice to be able to offer this option for patients because some of them are quite nervous and anxious about their wait time for surgery, and knowing that this is something that is available on a shorter basis makes it easier,” says Amanda.

The shorter wait times have also been helpful for fertility patients, who are on a time-sensitive treatment course, says Helen. “We can get them treated rather quickly if they have a polyp or fibroid that needs to be removed, and then they can get back into their in vitro fertilization cycle within one or two periods,” she says.

Along with receiving positive responses from patients, the pilot has proven to be successful for the team. “With this new model of care, we have seen improved patient experience, faster recovery times and increased access to surgery,” says Carol. “This has become the standard of care for these types of procedures and patients going forward.”

With the pilot complete, the program has continued with more surgeons at the Misericordia expressing an interest in being involved. The program’s success has also captured the attention of other sites across Alberta, which have reached out to Amanda, Carol and the educators for information and guidance.

“Women should be given this option, and we just need to make sure that [they] have access to it,” says Amanda. “If they’re suffering from problems, we can help them get things addressed quickly so that they get back to functioning a little bit better in their daily lives.” 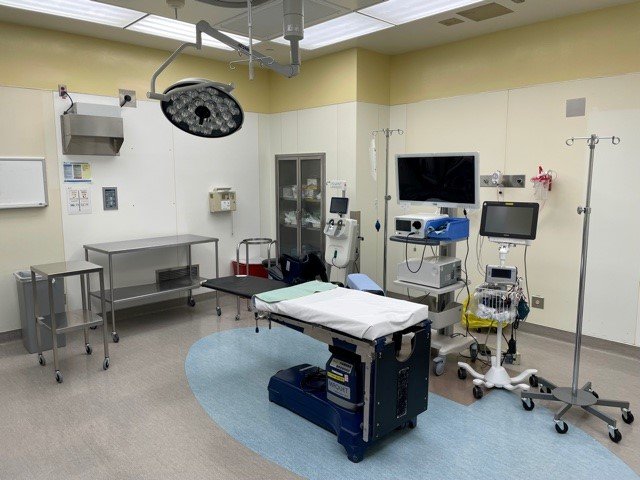 The surgical team performs the day surgeries in a small operating theatre. 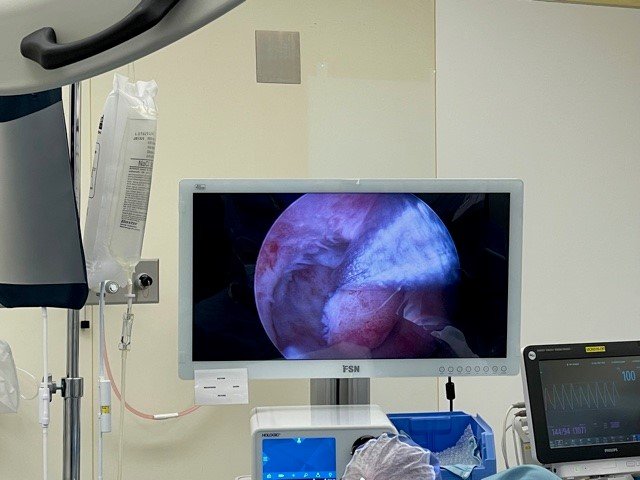 The new program focuses on hysteroscopies — procedures in which surgeons use a scope inserted in a woman’s uterus to check for abnormalities or reduce bleeding.
Marguerite Watson, Senior Communications Advisor, Covenant Health